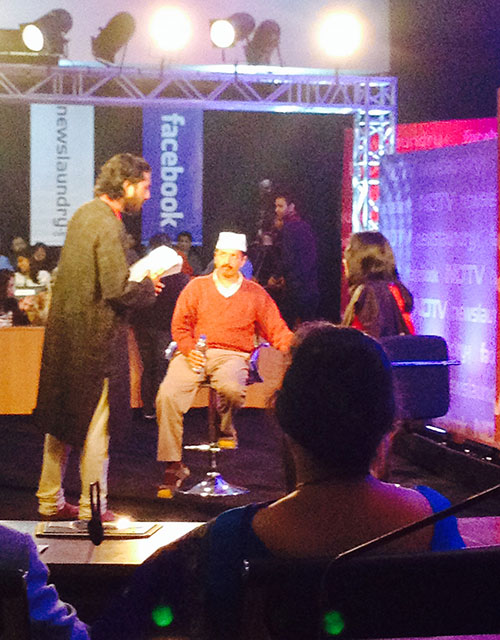 The host, Madhu Trehan of Newslaundry, was more anxious than Arvind Kejriwal. Before Kejriwal walked in, she rehearsed her cue from the teleprompter many times. Waiting for the show to begin, the audience got a sense of the questions, and they seemed tough. How will you solve Arunachal with China? Why can you protest when government workers can’t? Are you supporting Mamata Banerjee now that Anna Hazare is? Why are you so eager to die and become a martyr?

“Who are you going to vote for?” I asked the architect. She was offended. Secret ballot and all. How could I ask such a personal question? I was meeting her the first time.

“Who did you say you were going to vote for?” I asked again.

Not appreciating the question, she turned to the elderly woman to her left and they both started gushing how cool Arvind Kejriwal is. “He’s so cute!”

As the show began, Trehan asked him to define his vision for India in three minutes. Kejriwal said he had a question first. Why did Modi refuse to come? What conditions did he put forth? Trehan in her reply hinted it was because of Modi’s boycott of NDTV, the broadcast partner.

Modi supporters on Twitter complained that the questions put to Kejriwal were easy, and we can agree or disagree about that. But Kejriwal’s answer to most things is that he is worried about the country. The country is falling apart. It’s breaking away. People are dying. All he wants is to save us from the established system, where the main players are playing a game to keep themselves in power and fool the rest of us. The power of this positioning cannot be underestimated, not for a few years. We clearly have a long-distance runner here, love him or hate him.

Throughout the show, Kejriwal batted the most difficult questions with great elan. You could be infuriated if you didn’t agree, or you could love him, but you couldn’t ignore him. An audience waiting for him to be grilled turned happy, cheery, clapped and laughed. Some gheraoed him for photos and autographs and to take up their earth-shattering causes.

Kejriwal’s fan base is much smaller than Narendra Modi’s, and Rahul Gandhi’s fan base is to be found nowhere, not even within his party. After the show was over, Kejriwal said, “Give me Modiji’s time!”

The woman next to me said he should have said this on air. But that would have been a give away that Kejriwal wants to hog the media limelight and use it to project his mission bigger than it is, creating a perception that then becomes a reality.

“I want him!” said the woman next to me. Before Shobhaa De can say it, AK49, as some call him after his 49 days long chief ministership, is the hot new sex symbol of Indian politics.