Like most Bollywood films, Dilwale Dhulania Le Jayenge ends unrealistically. The film ends with the girl’s father letting her go with her suitor, after having forever decided how she will live her life and who she will marry. “Ja Simran ja,” he says at the railway station, “jee le apni zindagi.” Go live your life. She runs as the train had begun leaving, catches Shah Rukh Khan’s hand and we get one of the most iconic Bollywood scenes.

While the happy ending makes the viewer happy, the overwhelming message of the film is inescapable: if your parents don’t let you marry who you want, don’t run away. Convince them. The obvious implication is that if they are not convinced, eloping against their wishes is not an option.

Simran, the girl in question, played by Kajol, is ready to rebel and run away. Her mother and sister are happy to support her in this. But the mad lover, Raj Malhotra aka Shahrukh Khan, doesn’t want to disrespect elders. In other words, men keep family and tradition (read patriarchy) alive, and they keep in check women’s unbridled desires which threaten tradition. That is what we learnt fromDDLJ. That fathers should let their daughters choose their own destiny, which happens in a contrived way in DDLJ’s final act, is hardly the message you go home with. 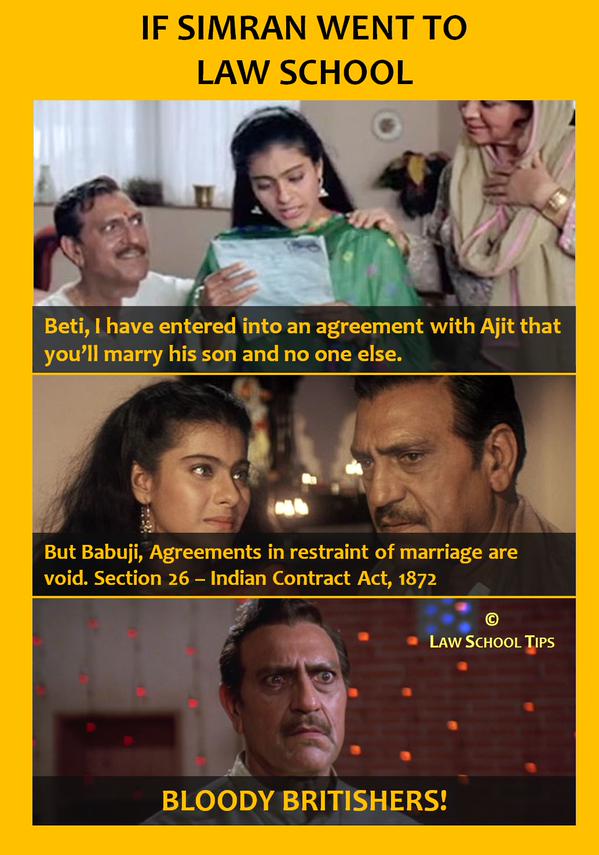 DDLJ not only told us to not rebel, it made love’s rebellion against tradition rather uncool. Making the same point, Siddharth Bhatia writes that this isn’t DDLJ’s fault. He writes, “Films reflect reality, not create them. Indeed, it is to Aditya Chopra’s credit that he understood the new ethos of the nation and captured it so well and so early on.”

I disagree. More than capturing a reality, DDLJ shaped one.

This may sound like pop sociology but DDLJ wasn’t a mere film. For those who grew up in the ’90s, the film defined love. It was the coming of age film. It is so iconic that its dialogue and scenes have become shorthand. Suddenly, mustard flowers became a symbol of love. Mustard flowers! This was the film Shah Rukh Khan says made him a star, and its train scene has been copied in tribute in a number of films since then.

A film so wildly successful could not but have a deep cultural impact. Whenever I see my peers and friends give in to family pressure and choose marriage over love, I wonder why rebellion isn’t an option for them. I have come to the conclusion that DDLJ is to blame.

Amongst the middle classes and the elites, when was the last time you heard of young men and women defying their parents in matters of love and marriage? You see it in villages and small towns and amongst the lower classes. That’s how you hear of honour killing. A family killed their daughterin the national capital just a few days ago.

There are several variations of the marriage problem that men and women on their twenties and early thirties face. They don’t want to marry yet but do it because the parents want it. They love someone outside caste or religion (rarely class, these days) but break up because parents won’t accept it. Or they don’t want a traditional wedding. Or they don’t want the families to spend their life savings on a week-long wedding. But tradition must be kept alive.

A thousand weeks later, Simran and Raj Malhotra must have become parents. They probably have a son and a daughter in their late teens. Having won his wife from her father, how much do you think Raj Malhotra is willing to let his children rebel? In all probability, he has become the tough patriarch who he once fought against.

DDLJ isn’t exactly a film to be celebrated.