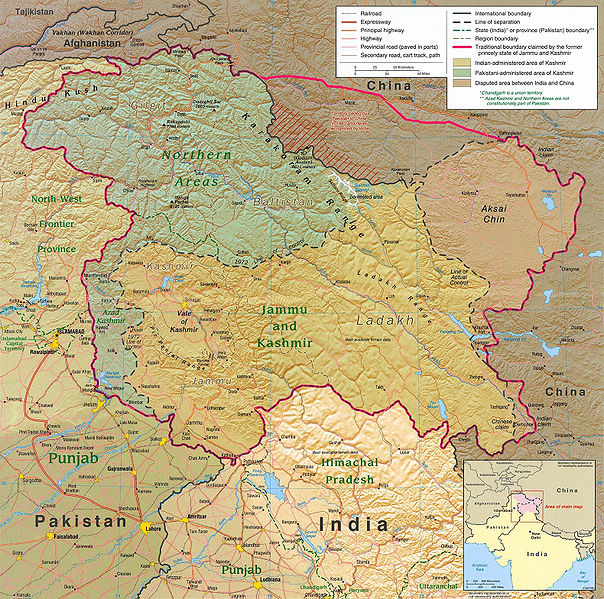 ‘Every nationalist is capable of the most flagrant dishonesty.’ — George Orwell

Kashmir is a prison with three walls: one Indian, one Pakistani and the third Kashmiri.

Each wall thinks it is a window to freedom and love and the land where honey flows freely and manna drops from heaven. Yet each of them is a wall, and together they make a triangular prison cell in which no sunlight comes in and there is regular torture.

Tagore called nationalism a great menace. Kashmiris are not the only prisoners of this triangular cell. The cell is claustrophobic but it is Himalayan. Trapped in it are not just Kashmiris, not just Muslims and Pandits, not just stone-pelters and paramilitary troopers, not just Gujjars and Pahadis and Gilgitis and Ladhakis, but also the people of India and Pakistan.

Someone locked us all in and threw away the keys, perhaps deep in the English Channel.

Nationalism, as is its wont, glorifies death by calling it martyrdom. What an evil thing that can make large populations glorify death over life. In ordinary circumstances, it is called suicide. But when you die of nationalism, it is called martyrdom.

Kashmiris are willing to die for Kashmiri nationalism, they call it shahadat, martyrdom. One of the saddest moments of my life was to meet a 14-year-old stonepelter in Anantnag/Islamabad* who said he wanted to die of ‘Indian bullets’ while pelting stones. His shahadat, he said, will bring Azadi for Kashmir. He won’t be around to see this Azadi, alas, but he wanted to escape the prison of life.

Indians would like to believe he must have been indoctrinated by Islamism, waging jihad with stones in pursuit of 72 virgins. But he was only banging his head on the bloodied walls of nationalism.

What madness is this? I urged him to rejoin school, make a life, a career. He said it was revenge he was after. He was two years old when the Indian army, he claimed, took his father in and tortured him. He was lucky to be released alive but has since been a “mental patient”. Growing up with a mentally unwell father, who knows ‘India’ did this to him, the young boy wanted revenge.

The site of three competing nationalisms, every house in Kashmir has such a heartbreaking story. I stopped going to Kashmir, it’s the saddest place on earth.

Every few years, another set of toddlers turn into angry teenagers and learn stories of the repression of Kashmir from friends, family elders, books and journals, the internet and the graveyard memorials of the martyrs. As many as a lakh of people are said to have died for Kashmir, I told the young boy, but Azadi is not in sight. How will your shahadat bring Azadi? “It will,” he insisted, “it will.”

I don’t know if he is alive or dead now, this was six years ago. I can’t forget the room we were in, I felt helpless, like being in a prison, unable to convince him of the value of human life.

Unable to breathe in the triangular prison, Kashmir has become a factory of death. Like any factory, its processes are repetitive and banal.

In the stories about his martyrdom, spread by word of mouth or little Urdu booklets, his sacrifice must have been extolled with stories of his bravery and selflessness for the Kashmiri nation, and so on. His name must be a legend in his neighbourhood in Anantnag/Islamabad by now, where incidentally an election was cancelled this week. The cancellation must have been a celebratory occasion amongst his fellow stone-pelters.

There are many questions about the Azadi that Kashmiris seek. And there is no doubt this Azadi is the flag-passport-sovereignty type. Ask about Kashmiri Pandits, or Islamism, or Ladakh, and you will be called an enemy of Kashmiri nationalism. Kashmiris seek in nationalism a solution when nationalism itself is what has brought them to this pass.

When I asked such uncomfortable questions, I was called an Indian intelligence agent. As if Kashmiris themselves aren’t good at that job. Chastised, I stopped talking about Kashmir. I had nothing more to say.

One day there was some violence in the Jammu region of Indian-administered Kashmir. The foreign press called it violence in Kashmir. I tweeted saying Rajouri wasn’t in the Kashmir valley, it was in the Poonch valley. A Kashmiri replied saying well, it was part of ‘Greater Kashmir’. (Incidentally, it is also the name of the largest selling English newspaper in Kashmir.)

The large and diverse territory of Jammu & Kashmir, united into one artificial unit by a British treaty, is made of many valleys. There is the Tawi valley, the Chenab valley, the Lidder valley, the Neelum valley, the Sind valley, the Poonch valley. All of these were ‘Greater Kashmir’? What did that even mean? This is when I understood why we only hear of one Valley with a capital V, the rest of the gallows are cloakrooms.

I told him to look up Wikipedia, it translates Akhand Bharat as ‘Greater India’.

Since then I have interacted with people from different parts of ‘Greater Kashmir’ and found they are not happy with the imposition of Kashmiri nationalism on them. I met Paharis and Gujjars and Ladakhis, and even looked up social media to see what people in Gilgit and Baltistan have to say. And no, they don’t consider themselves a part of ‘Greater Kashmir’. They complain of Kashmiri condescension and downright racism, and the Shias are wary of Sunni Islamism.

Kashmiris don’t have any answers to such complexities except saying that this is typical Indian strategy of divide and rule. When I heard a prominent Azadi-pasand Kashmiri journalist refer to the valleys around Kashmir as “areas on the periphery, for want of a better word,” I had heard everything.

What is so wrong about Greater India then, with places such as Kashmir on its periphery? From Srinagar, Rajouri is periphery. From Rajouri, Srinagar is periphery. The centre is where you stand. In Delhi, it feels as though it is the geographical centre of India.

The world looks very different when you read it through geography and not national boundaries.

None of this is to say that Kashmiris don’t have genuine grievances or real grief. They have rights and aspirations that the world outside the Kashmir valley doesn’t like. Yet Kashmiris also have to understand their open wounds are as much caused by Kashmiri nationalism as Indian and Pakistani. Kashmiris are oppressed, yes, but the oppressor isn’t singular, and it isn’t an army.

BJP general secretary Ram Madhav recently said of the use of human shield by the Indian Army in Kashmir, “All is fair in love and war.” Apart from the confirmation that India was at war with what it calls its own people, it raised the question of love. Where is the love?

Ram Madhav’s idea of handling Kashmir is no different than the Congress party’s. It is to strengthen the Indian wall of the triangular prison so Kashmiris can bang their heads on it with ever greater ferocity.

It is not just Kashmiris who lose their lives in this prison. The body bags come home to the Indian hinterland too. Beheaded bodies from the border and slain soldiers from the highways of the Vale of Kashmir are hailed by us as martyrs in service of Indian nationalism. We valorise them with awards and outrage, resolving to fight the enemy with even more martyrdom. Nary a voice points out these lives could be saved if we had said all is fair in love, but unlike for the armed forces, there is no special powers act for love.

A special powers act for love would mean assuaging the anger of that 14-year-old stone-pelter, of healing the wounds of a conflict nearly three decades old, so that the factory of death declares a lock-out.

But love is for the weak. India wants to be a strong and brave super prime time nation. India thinks it becomes a greater nation by blinding Kashmiris with pellets so they see no evil anymore. Out of sight, out of mind. Muscular policy, they’re calling it. But which muscles? They should check with a cardiologist. The heart also has muscle.

We wonder if we are losing Kashmir because we are not interested in the Kashmiris anyway. We gave up on them long ago in a hoary past we choose to forget. It was when Nehru went back on his promise to let Kashmiris decide and put Sheikh Abdullah in jail.

Holding on to the periphery of Kashmir is no big deal for a nuclear-armed nation with a huge army and countless paramilitary companies. But surely somebody someday will sympathise with these troops who die for the triangular contest of nationalism in a beautiful corner of the Himalayas? Is there no alternative to this nationalism that has ceaselessly brought home the coffin boxes since 1948?

It is noteworthy that the Pakistani response to the uprising in Kashmir in 2016 was much stronger than a similarly strong uprising in 2010. Amongst other things that have changed since 2010 is the speed of information.

Videos and images from Kashmir travel via instant messengers straight into Pakistani phones. Pakistanis outrage about them on social media and TV studios just as the Indians outrage about the videos that show Indian soldiers getting targeted. News of protests and repression in Kashmir affects public opinion about India and India-Pakistan relations in Pakistan. Right-wing groups start protesting, putting pressure on the government to go tough on India. The same events in Kashmir result in Delhi’s studio warriors declaring war on Pakistan.

In the triangular prison, the Indian and Pakistani walls face each other. They scream at each other in the half-sentences like a man shouting at the mirror and wondering why the ghost is shouting.

Kashmir is as much an emotive public issue in Pakistan as in India, because just like India, they have made Kashmir a lynchpin of Pakistani nationalism. There was this unfunny moment in the ’90s when Pakistan-backed militant groups in Kashmir started killing Azadi-pasand Kashmiri militants because they didn’t want Kashmir to merge with Pakistan! So much for the Pakistani concern for the Kashmiri people.

Similar repression by the Pakistani army in Baluchistan doesn’t make Pakistanis question their anger over Kashmir, because nationalism says don’t think too much and don’t ask questions. Pakistanis also pay a heavy price for cementing their wall in the Kashmiri prison. The banality of martyrdom is in abundance, be it the martyrdom of trained militants in the name of religion or those of soldiers on the line of no control.

Indians, Pakistanis and Kashmiris can break down this triangular prison and break free. They can do so by picking up the four-point formula Manmohan and Musharraf had once discussed. Make borders irrelevant, demilitarise, give administrative autonomy, have joint control and eventually, some kind of joint sovereignty. A win-win situation that could make Kashmir belong to everyone. Lahoris could holiday in Srinagar, and Delhites in Gilgit.

Indians, Pakistanis and Kashmiris will do no such thing, because where’s the fun without nationalism? Nationalism is like tobacco, an addiction. It kills but we like it. To quit the habit we’ll all have to start asking difficult questions of ourselves, but nationalism brooks no questions.

(*Anantnag has also been called Islamabad by Kashmiris for centuries, long before the Pakistani capital was created. Even in Swami Vivekananda’s travelogues, it is called Islamabad.)