First they said they have an OBC-EBC strategy. Then they gave away a large number of tickets to upper castes. Then they said their chief minister will be from amongst the backward castes. Now Amit Shah says it could be from upper castes or backwards, we’ll decide after the elections.

The BJP’s shifting, confused, botched up caste strategy in Bihar can best be described with the Hindi proverb, Dhobi ka kutta, na ghar ka na ghat ka. By now the party finds itself between a rock and a hard place, sending mixed signals and confusing all voters. END_OF_DOCUMENT_TOKEN_TO_BE_REPLACED 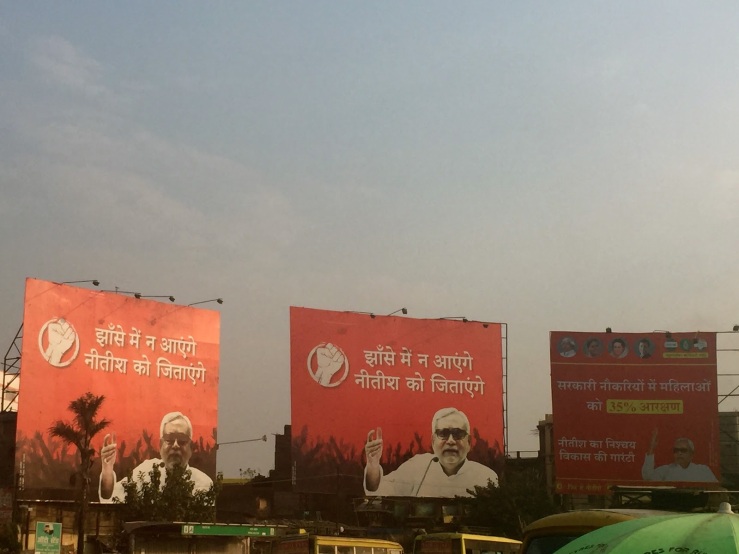 PATNA — The visuals of the Grand Alliance’s outdoor campaigning stand out not only for the lack of clutter, but also for their colours. The hoardings, the 300 raths traversing Bihar, the election stage–everything in the Grand Alliance’s election campaign in Bihar is blood red in colour. Some of the hoardings are yellow, and some of the early Nitish Kumar hoardings were in a bright multi-colour pattern that would have better suited a mobile phone advertisement. END_OF_DOCUMENT_TOKEN_TO_BE_REPLACED

[This article first appeared in HuffPost India on 12 October 2015.]

Sanjay Kumar of Lokniti-CSDS writes that Bihar looks like a difficult, close contest, and we shouldn’t blame the opinion polls if they get it wrong. This seems to be a shift from his own survey data published in the Indian Express, which said that the National Democratic Alliance was a good 4% ahead of the Grand Alliance.

When this writer wrote in the Huffington Post that the details of Lokniti’s own data suggests that it’s advantage Grand Alliance, Sanjay Kumar and Suhash Palshikar responded saying that they stand by their assertion that the NDA was ahead.

What good is the survey methodology if it can’t give us clarity in a close contest? When it’s not a close contest, it’s clear as daylight which way the hawa is blowing. It is bizarre that Lokniti-CSDS is warning us in advance to not blame the surveys. Why not?