First published in Scroll.in on 5 January 2015.

The police in Pakistan have told the Peshawar High Court that they had indeed detained Mumbai resident Hamid Nihal Ansari in 2012, and handed him over to intelligence officials. This is the first official word about what happened to Ansari, went from Mumbai to Kabul and illegally crossed over into Pakistan to look for a Pashtun woman he had fallen in love with through the internet.

Ansari had disappeared soon after he had checked in to a hotel in Kohat, a town near Peshawar, on November 14, 2012, and has since been missing.

But in an affidavit to the Peshawar High Court, made in September but released to Ansari’s parents only recently, the Kohat police has said that the young man was “netted down by local police” on the “information and pointation [sic] of Inspector Naeem Ullah of IB [Intelligence Bureau], Kohat”.

The Peshawar High Court had asked the government to find out where Hamid Ansari is, and an Islamabad-based commission to investigate enforced disappearances is also trying to locate him. 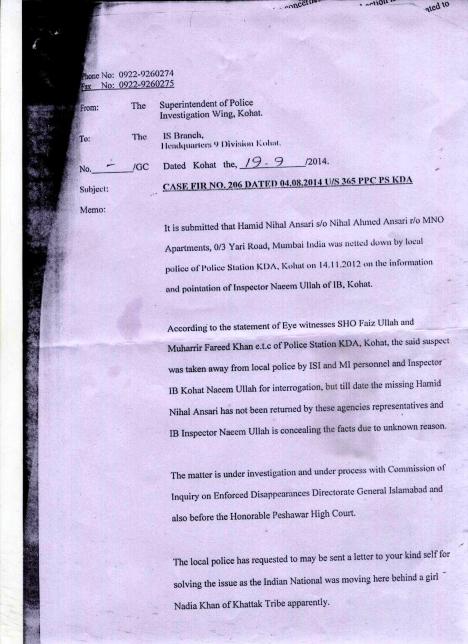 In November 2012, Hamid Nehal Ansari, a 26-year-old management teacher in Mumbai, told his parents he had an offer for a job at the Kabul airport. His parents were against the idea, fearing for his safety. But he insisted it would be good for his CV. A week after he reached Kabul, they lost contact with him.

When they turned on his his computer, they found his Facebook and email account open. Looking into those for clues, they discovered what had happened. He had been in love with a woman in Pakistan over the internet for two years. Let’s call her Razia; revealing her real name could put her in trouble. She lives in a place where honour killing is not uncommon.

One day, Razia told Ansari that her parents had got to know about the relationship, and were getting her married to someone. Then, she disappeared. Ansari had gone to Kabul to cross the border illegally into Pakistan so that he could rescue Razia her from the forced marriage. In her last phone call to him, she had been crying, and said that her sister had told their about their relationship. Her Facebook was likely deleted.

A distraught Ansari did all he could to find out about Razia. He even found another Kohat woman on Facebook and requested her to find out. She couldn’t. He decided to try and get a visa to Kohat, making several calls to the Pakistan High Commission in Delhi. As a Rotarian, he managed to get an official invitation from the Peshawar chapter of the Rotary club to visit Peshawar and Kohat to interact with local youth. The Pakistani government wasn’t taken in by the idea.

He met Mumbai-based activist Jatin Desai of the Pakistan-India People’s Forum for Peace and Democracy. Perhaps Desai could help him get a visa.

Kohat would never be possible, Desai said. It is in the heart of a conflict zone. Besides, Desai said, that area is known for honour killings. Forget the girl, he said. But Desai could see that Ansari was mad about the girl; she was all he could think of.

Ansari had countless Facebook chats with a few Pakistanis to discuss his dilemma. Transcripts of those, shared with this writer by his parents, helped piece together what had happened.

Three online Pakistani friends not only encouraged Ansari to cross the border illegally from Kabul to Kohat, but also gave him detailed instructions. One of them even instigated him to not waste time and get there to save Razia.

These friends were Atta-ur Rehman Awan, a graphic designer with Dastak, an Urdu magazine in Kohat; one Shazia Khan who claimed to be a medical doctor in Islamabad; and the mysterious Saba Khan.

This is an excerpt from a chat between Shazia Khan and Hamid:

Shazia: It’s very difficult to get a visa to Pakistan these days. Why don’t you get a visa to Afghanistan instead? From Kabul, come to the Pakistan border at Torkham and I’ll get you to Karak or Kohat from there. Luqman also says you should come via Kabul. Kabul to Torkham is only 150 kms.

Hamid: Visa for Kohat is very difficult. But visa for Lahore is easy. I asked someone at the Pakistan High [Commission] in Delhi what is the way out. They said I need an invitation or a clearance from the Ministry of Interior. By the way I have a friend in Jalalabad…

Hamid: I asked my friend about going to Peshawar from Jalalabad, he said there’s a lot of vigilance and there’s a very high chance I would get caught. Without a Pakistan visa getting back into Afghanistan may also be difficult. It might be easier if I get a Lahore visa. I have a friend in Sindh who says that once I reach Lahore he can get me an extension visa to Kohat. But I need to first get a visa to Lahore. I am ready to take all risk.

Shazia: Oh there is no checking while entering Pakistan from Afghanistan. I will get you to Peshawar in my own car. I’ll also get you an ID card of either Pakistan or Afghanistan.

Hamid: Now you tell me what to do.

A translated excerpt from a chat between Atta bhai, as Ansari called him, and Saba Khan. Hamid was not online, but was cc-ed:

Atta: I’ve been recommended this man Kamran Khan [phone number]. Call him and see who he is and if he can help? But remember nobody should know Hamid is Indian. If anybody comes to know, there could be a mess.

Saba Khan: I too gave you someone’s number, was it of help? I got that number from a Frontier Corps guy. And yes, apart from us nobody knows that Hamid is Indian, let’s be clear about that.

Atta: Okay, I will call that guy. I got to know from someone that there is no problem in coming from Kabul to Pakistan. All you have to do is to strike a deal with the taxi driver at Kabul airport. There is no checking. It is only on the return trip that there are ten check points. What do you recommend? That man also told me the trick is that nobody other than the taxi driver should know you are going to cross the border. The taxi driver will drop you at Torkham.

A chat between between Atta and Hamid:

Atta: Please don’t mind my saying this, but you are very lazy. If I were in your place, by now I would have done everything.

Hamid: I know, but I have deliberately delayed this. All this mess was caused by her sister. It all happened too suddenly. And then this visa problem. These High Commission people don’t give a visa soon.

Then, on 12 November 2012, he sent an email to Saba Khan. The email’s IP address shows it was sent from within Pakistan. Here is an excerpt, translated from Roman Urdu:

“Listen, I am fine here. I am with Atta bhai. I reached late at night, but everything is fine. Just keeping a very low profile. I should get a new mobile by evening; will let you know. For obvious reasons, I cannot call you.

Take care. Inshallah we will both return soon. Pray for us.”

That was the last online footprint left by Ansari.

Hamid Ansari’s mother is a college lecturer in Mumbai. His father is a banker. They emailed all three people and got no replies. Most phone numbers in the chats have stopped taking calls from Indian numbers. Fauzia Ansari had a relative in Dubai call Atta Ur Rehman Awan, who said that he had found a dhaba in Kohat for Hamid to stay. He was there for about two days, after which the “agencies” took him away, Awan said.

Over a year ago, this writer managed to get in touch with a local journalist in Kohat, who was enthusiastic about helping bring Ansari back home. He called up Awan, who said that “agency people” took him away, and that he could not say more on phone. The journalist then met Awan in person, and also a university student that Ansari was in touch with. This journalist told me that both said “agencies” had taken him away. Awan and that student had also been questioned by “the agencies”.

The journalist from Kohat said that he could not say more on the phone and could not help, as it was “a sensitive matter”. One journalist in Lahore, Zeenat Shahzadi, who had shown interest in the story, said the small hotel that Hamid had stayed in was called the Palwasha. She visited Kohat and the Palwasha Hotel, and found that Ansari had booked himself in room number 3 under the name “Hamza S/O Muhammad Khalid” on November 14, 2012, at 5.20 pm. As he was on his way to his online lover’s house, the Kohat police detained him and searched his hotel, and allegedly found Indian documents.

We now know for sure what happened: the “agencies” took him away.

Ansari made a huge mistake, but one feels angrier about his Pakistani friends online, who first gave him this crazy advice to go to Kohat via Kabul and bring the girl back to Mumbai. Ansari reportedly had the film Dilwale Dulhaniya Le Jaayenge on his mind – he wanted the father to willingly let the girl go with him.

The chats also contained Razia’s father’s address and phone number. I called him up too and he angrily said what any father would say in such a case: “She had no friend. Nobody came here. She is married now.”

Perhaps the “agencies” think he is an Indian spy, given the paranoia in Pakistan about India’s alleged activities on the Afghan border. At the same time, Indian investigators probably think he is being used against India. Having read his long Facebook chats, I am convinced he was nothing more than a naive young man whose love was blind. Many Indians have a fascination for beautiful Pashtuns. Ansari was perhaps one of them.

The maximum punishment for illegally crossing into Pakistan’s borders is six months in jail. Ansari has been in ISI custody for over two years now. His parents are going from pillar to post, hopeful that one day, Ansari will be home.

The Indian government has approached Pakistan several times to ask about Ansari but there has been no response. Ansari’s parents amanaged to get a lawyer in Islamabad file a case in the Pakistan Supreme Court, which has included his name in the list of many disappeared persons in Pakistan’s conflict zones.

The Rotarians Ansari was in touch with, moved the Peshawar High Court in May last year. The next hearing is on January 29. Will the “agencies” acknowledge they have him, and produce him in court?